Please feel free to contribute by creating new articles or expanding existing ones.

About Era Of Newborns

In Era Of Newborns is an open world, online multiplayer survival game, where players begin to build a new age of humanity in 2048, when an artificially bred virus has almost irradicated most of the human population on the planet. Due to disease, many only lived a short life, but soon men realised, there are also individuals with immunity. The people named them "Newborns" and thus a new age had begun.

Events in Era Of Newborns describe the battle of Newborns in the new age. 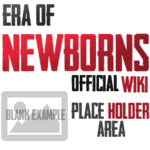